In 1850 Baron Josef Huppmann established the Ferme cigarette factory in St. Petersburg, Russia. Subsequently, in 1872, he opened another factory in Dresden, Germany. In 1856 Robert Gloag (right) opened the first cigarette factory in London selling a brand called Sweet Threes. A few years later, another Londoner, Philip Morris, began hand-making custom cigarettes and sold them to the carriage trade. In 1868 the Bedrossian Brothers opened a cigarette factory in New York City. Their brands such as Non Plus Ultra, Petite Canons, No Name 10s, and Neapolitans, were made from blended Virginia and oriental tobaccos.

Cigarette Manufacturing in
The United States

The first mention of cigarettes in the United States was around 1863. Early cigarettes were typically made of a single blend of oriental tobacco with sugar and additives to retain moisture for hand rolling. In the mid-nineteenth century tobacco companies began to establish cigarette factories employing mostly immigrant woman at low wages to hand roll cigarettes. A fast roller could make up to 2,000 cigarettes a day or about 4 cigarettes per minute. 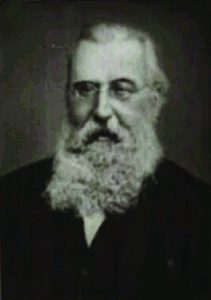